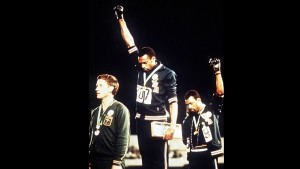 Why run in Mexico and crawl at home?

In 1968, John Carlos and Tommie Smith each raised a gloved, clenched fist during the Olympic medals ceremony as the national anthem played. Gold and silver medalists, the two African-American runners were frustrated by prejudice and racism at home at the same time they were "representing" the US in the Olympics.

John Carlos spoke at the 2013 CCCC. He shared his memories of black-white relations, and his interactions growing up in New York. From neighborhoods full of bars and liquor stores to mistreatment by others. He recounted the time he went to see Malcolm X speak and approached him after his speech. Malcolm X invited John Carlos to follow him around, if he could keep up. And he credits his parents and relatively stable home for much of his character. As he put it, his parents taught him to be "honest and faithful."

His conundrum: To whom should he be honest and faithful? Man or God? A major theme in his talk was the way that man's law is sometimes (often?) in opposition to God's law. Which law does one follow? This is a fascinating perspective on the challenge of following the laws one perceives as unjust. It provides a person with a critical perspective on the laws of the state. At the same time, though, it potentially leads down the path to anarchy.

"When I got on the plane to go from Harlem to Texas, I was John Carlos. The minute I got off the plane my name changed to boy." As he put it, people in Texas had never seen someone with his talent, and they tried to tell him what he could do. This tension brought out the frustration in a man unaccustomed to the kind of full-bore segregation he experienced in Texas and culminated in the events in Mexico City.

Carlos' talk was fascinating precisely because he talked about how he used the celebrity of his athleticism as a "springboard" to advance the cause of social justice and was prepared to suffer the negative reaction to his gesture. I had not realized it, but Carlos explained that he and Tommie Smith thought a great deal about their actions before they did it. They thought through the possible repercussions, considered how to protest, and made a decision about the timing. His "platform" for a statement came from his success as a gold medal runner. The question was whether to use that platform to make a statement or to use it celebrate his athletic achievement.

Would Carlos become just an example that shows that America is a land of opportunity? Or would he become a conduit for channeling African-Americans' frustration with prejudice, racism, and inequality in the US?

I am Academic Director of the School of Arts and Humanities at the University of New England, where I am Professor of Rhetoric & Composition, as well as Director of Composition. My scholarly interests include new media composition, writing program administration, and Writing Across the Curriculum.