I finally sat down and started some serious work on a print stylesheet for Across the Disciplines. While there are some kinks in the general printout, and I'm certain that tables, figures, and some other visual elements aren't going to print so cleanly in the current version, The print version of the journal's articles are far more attractive than they were just a few days ago.

We're hiding header graphics and nav, and are actually restyling headings for a black-and-white document. Hanging indents in the References are now carried over into the print articles. And more.

I had planned to write a print CSS for Across the Disciplines soon after I recoded the journal for XHTML 1.0 Transitional back around 2007 or 2008. It had been on the agenda for quite some time. It seemed that every time I thought I'd turn some attention to what is really a fairly straightforward project I found myself working on some other part of the site.

Most recently, I thought I'd finally write the stylesheet in December 2010. But then I spent a good bit of late December and January ensuring that the articles in the journal complied with HTML5 standards following a major site-wide overhaul of The WAC Clearinghouse.  The result is a site that will certainly remain compliant for some time since HTML5 is still just a draft specification. But that work really left little energy for CSS coding.

Lesson: Write a damn print CSS at the same time you write the screen CSS. It's easy enough to do and it's possible that readers will thank you for saving color ink, whitespace, and paper. 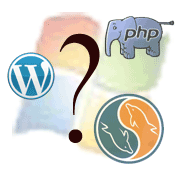 Last April, at the Northeast Writing Across the Curriculum Consortium (NEWACC) Steering Committee meeting at Boston University, I agreed to work with Mike Palmquist at the WAC Clearinghouse to get a NEWACC site up and running by the upcoming NEWACC meeting at Quinnipiac University. NEWACC was imagining a website within the Clearinghouse, as well as a blog. Ideally, this would run in a single tool, a CMS with a blog built into it. I started thinking WordPress because of its strong blog platform and its functionality as a CMS. (Obviously, that's not the only option.)

Unfortunately, the Clearinghouse didn't have the back end apparatus to host any of the popular blog platforms. And there were concerns about security in a PHP/MySQL setup. At first it looked like a unified solution would not be possible. But Mike is a great guy who is willing to push the boundaries a bit.  He told me they were experimenting with virtual servers for local projects at Colorado State. After a few months of testing, in mid-September Mike got a virtual Windows Server up and running, with IIS on it.

WordPress on Windows?  Hmm. Generally, Windows and PHP with MySQL don't even belong in the same sentence. My first response was, "This won't work." Then I thought, "This won't work without major hacks, patches, and a major months-long headache." Surprise!

WordPress is notable for its famous "5-minute installation" instructions. Right in the instructions are guidelines for installing WP on Win. Microsoft has a FREE (yes, free) product called MS Web Platform Installer that makes relatively quick work of all this headache. Get it installed on your server and you can manage all the app downloads and installations through checkboxes and a GUI.  Sweet!

It wasn't quite that simple, though I have to take some of the blame because of my lack of knowledge.  I didn't know there was something called IIS until I started trying to run a tool built to run on Apache on a Windows Server.  It took a couple meetings with some web folks at UNE (Al and Neal, thanks!) before I started to get a handle on the Windows Server/IIS thing. My internet access in Maine is pretty spotty, and this really limits file transfer speeds. The first installation of WP went into a subdirectory, and so it was in the wrong place.  And the FTP access wasn't activated on the server until after I poked around.What is amazing to me is that it's running at all. And it is!

WP 3 as a Network

The new power of WordPress 3 is that it can run multiple blogs in a single installation. It's important to activate this feature within 30 days of an installation. I don't know if NEWACC will have a use for this feature, but if we don't do it now we'll find it harder to handle down the road.  So I took on this piece as well.  I found instructions for Network activation on a Windows installation of WordPress at Laura Gentry's site. Smooth as silk.

4.5 months into the project we're set up with server space at Colorado State. We have a virtual server running WordPress 3, a platform that will integrate the NEWACC website with the NEWACC blog, and a tool that can actually scale up to host multiple blog or sites over time. I can now turn my attention to the thing I agreed to do in April.  I can start to build the website for NEWACC!

I was blown away at our last department meeting when it concluded with a farewell cake and much well-wishing as I prepare to leave York College for a new position at the University of New England in the fall. The cake was beautiful and delicious, and the card everyone signed left me sad to leave my colleagues. They're just wonderful.

Deep took some pictures and sent them to me, and I'm posting them here so I'm reminded of my soon-to-be-former colleagues with each posting.

It fascinates me that we have the technological capability to make documentation and reporting easier through single-source production, and yet our 20th (19th?) century thinking prevents us from taking advantage of the potential.

Faculty at CUNY are now required to enter their scholarly/creative activity into a CUNY web-based reporting system. As almost anyone can quickly recognize, this is yet another report piled on top of existing reporting.

As far as I can tell, there was no consultation with individual colleges on the design of this system and the potential integration of the system with local college online reporting systems. The result is an expectation that we'll take the time to "repeat" our reporting in multiple systems.

Why would anyone embrace technology if it means writing, re-writing, and re-writing the same text in multiple systems? The embrace of technology just seems idiotic in that kind of context. Copy-Paste works, but it really doesn't take advantage of the wonders of the database.

Fortunately, we have a responsive web team on campus. When I brought this new "report" to their attention, we were able to begin work on a mechanism to push the data entered in our local systems to the CUNY system.

The setup is not nearly as seamless as it might be. But it's a whole lot better than what would otherwise be the case.

A recently published article in Science (April 17, 2009) has me rethinking the notion of "low stakes" writing. The article by Cohen, et al. entitled "Recursive Processes in Self-Affirmation: Intervening to Close the Minority Achievement Gap," reports on the longitudinal effect of low stakes, structured writing on the academic performance of African-American middle school students.

In an effort to counter negative stereotype effects, researchers administered a series of values writing prompts aimed at helping the subjects articulate and affirm their values. "Beginning early in seventh grade, students reflected on an important personal value, such as relationships with friends and family or musical interests, in a series of structured writing assignments." One fascinating aspect of the study is that the writing was not directly connected to academic pursuits, or to the development of communication competencies. Most important, it seems, is the payoff!

The intervention appears to have had amazing consequences. "First, early poor performance was less predictive of later performance and psychological state for affirmed African Americans than for nonaffirmed ones, suggesting that the intervention reset the starting point of a recursive cycle. Second, the affirmation not only benefited GPA, but also lifted the angle of the performance trajectory and thus lessened the degree of downward trend in performance characteristic of a recursive cycle. Third, the affirmation's benefits were most evident among low-achieving African Americans. These are the children most undermined by the standard recursive cycle with its worsening of performance and magnifying of initial differences in performance. Fourth, the affirmation prevented the achievement gap from widening with time. Fifth, treatment boosters were not needed to sustain its impact into Year 2."

Who would have thought that brief, structured, values writing assignments could have such academic career-altering effects?

My own pedagogy has tended not to explore the ground on which the prompts in this study are built. Needless to say I'm rethinking some of my own practice in light of this work. These seemingly low stakes prompts, assignments with little or now direct connection to students' grades in a course, are anything but low stakes when one considers their impact on long term academic performance.

I am currently Interim Academic Director of the newly formed School of Arts and Humanities at the University of New England, where I am Associate Professor of Rhetoric & Composition, as well as Director of Composition. My scholarly interests include new media composition, writing program administration, and Writing Across the Curriculum.